I’ve been working with Project Jupyter since December of last year and it has been a wonderful experience. The last couple of days I struggled with the SQLAlchemy library that JupyterHub works on its internals. Since I studied this library and had to scratch some Stack Overflow questions to find some answers, I created this post to help digesting some of my doubts and findings.

Since this post became surprisingly long, I decided that the main problem I was having with SQLAlchemy should be in a separated post. So, keep tuned :)

All code is available here.

Creating and understanding the Engine

To start workin with SQLAlchemy, the first thing that they taught in the tutorials is to create an Engine. The Engine is how SQLAlchemy communicates with your database, so, when creating the Engine you should add your database (db) URL and that’s basically it.

Although we can access the db through Engine commands (we will see how), we usually don’t. You can, but you shouldn’t :)

So, you are just telling where your database currently is located. The attribute echo=True will make SQLAlchemy to log all SQL commands it is doing while you apply commands. This should not be activated in production, ok? 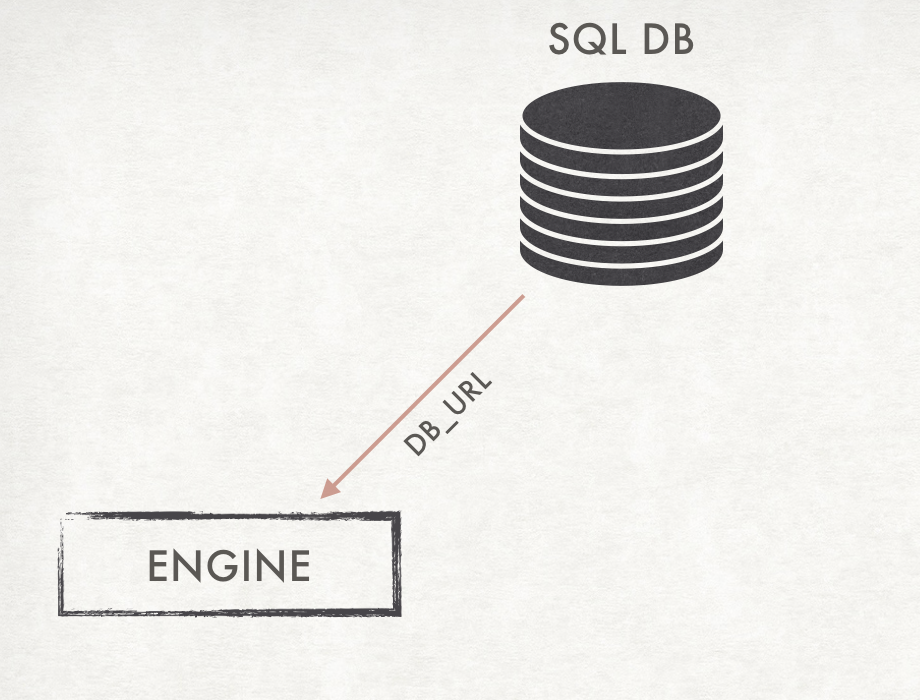 Once your engine knows your database, it is easy to execute commands on it by using a method called engine.execute(...). You can see how this is done here:

So you have a two way street: the Engine that knows where your db is and a method (engine.execute(...)) to change the db using the Engine: 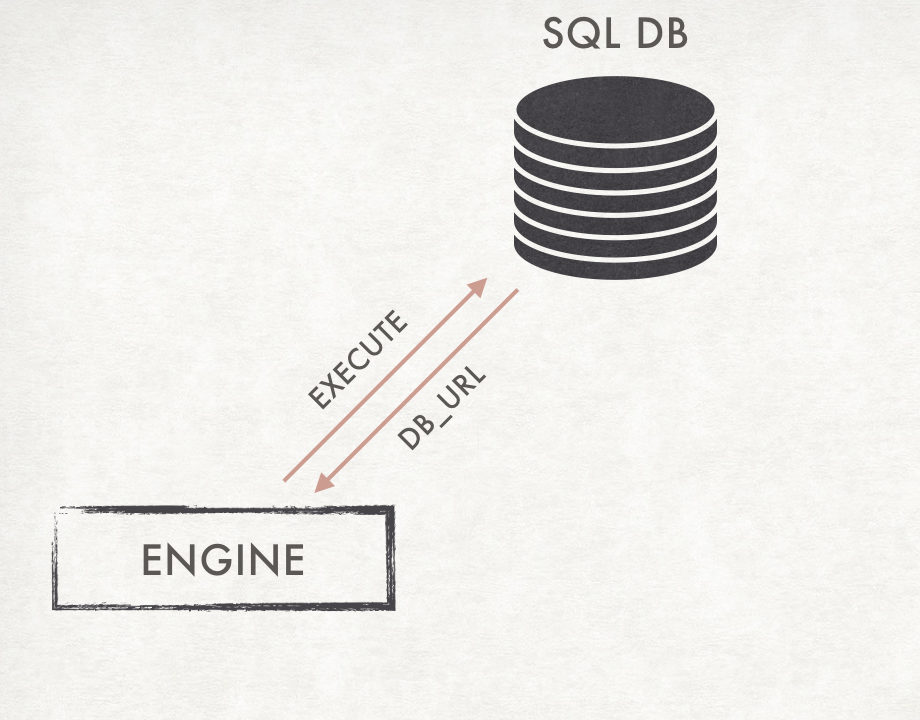 I also saw in some tutorials that you have another way of doing SQL commands through the engine by making a connection such as:

This allows us to create transaction commands, which means that all commands must be done successfully or all should rollback in case of an error [1]:

So, actually, the structure looks more like this now: 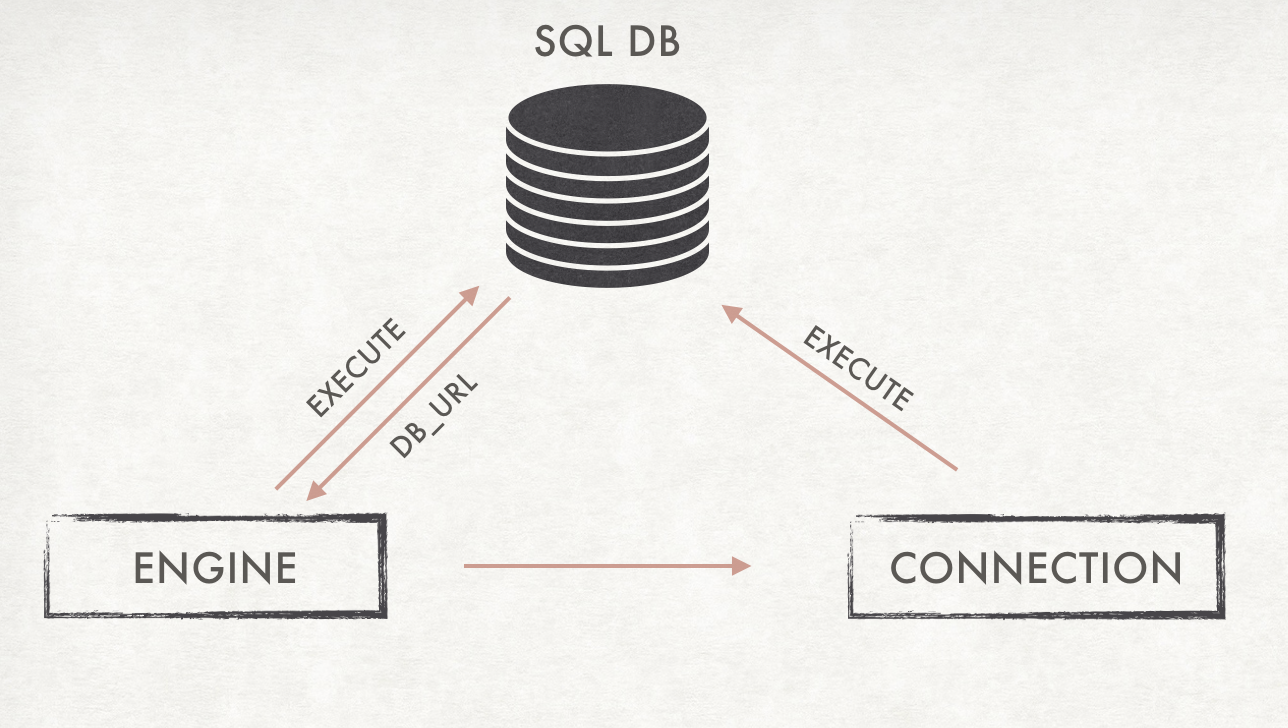 However, looking more deeply some answers about the differences between engine.execute(...) and connection.execute(...) I found that they are not different at all:

“Using Engine.execute() and Connection.execute() is (almost) one the same thing, in formal, Connection object gets created implicitly, and in later case we explicitly instantiate it.’’

So, feel free to use each one of those if you would like :)

Until now we connected to our database and were able to execute commands through SQL statements. However, the thing that makes SQLAlchemy so attractive is its ORM, which was not discussed so far.

The ORM must have a session to make the middle-ground between the objects we will deal with in Python and the engine that actually communicates with the database. So, we need a function called sessionmaker that we’ll pass our engine to.

So, you will use sessions to talk to your tables and make queries, but is the engine that is actually implementing things on your db. 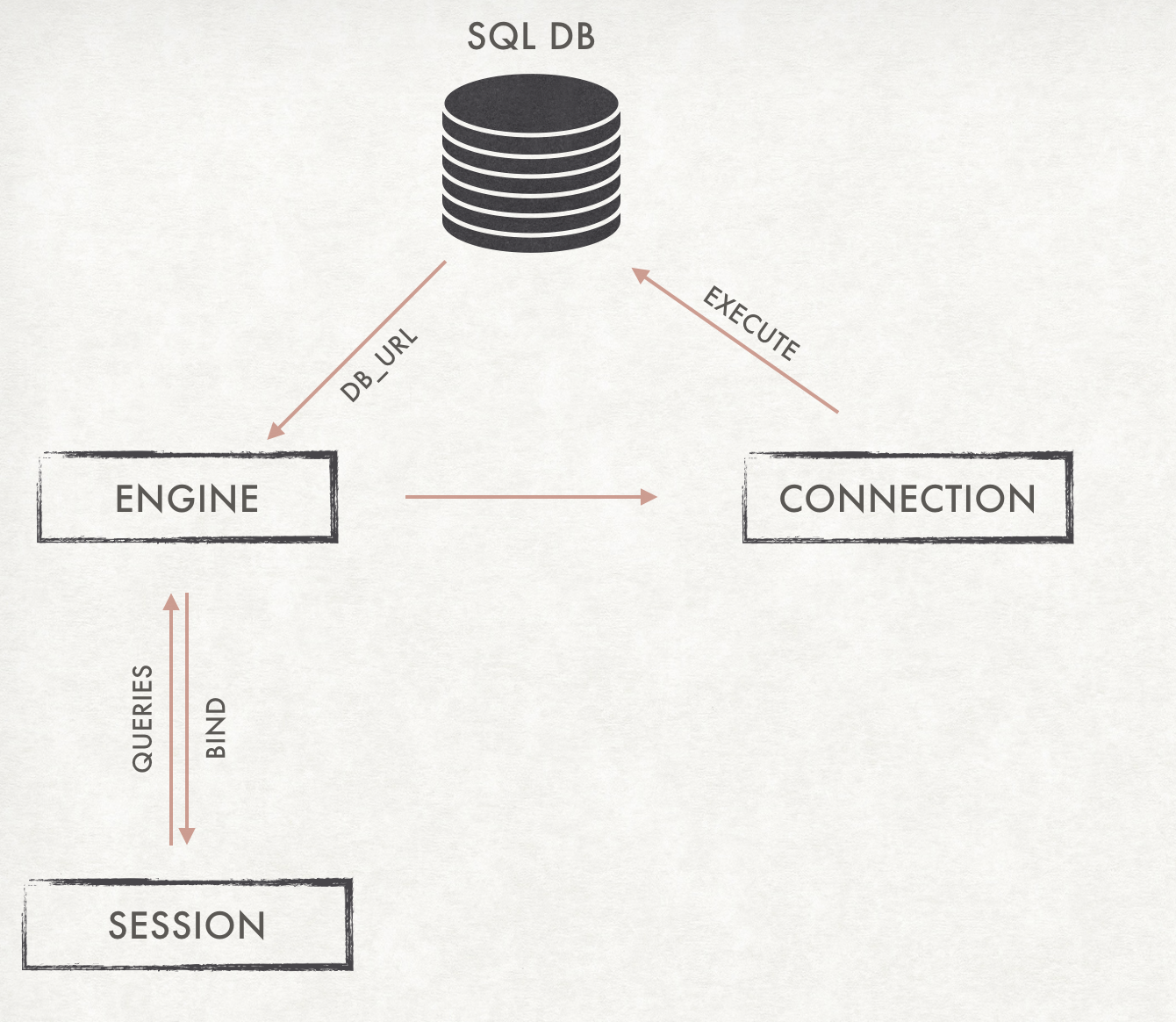 Although it seems confusing having three entities before even starting with our tables, most of the times after the initial setup you will use the session much more than the engine and connection will be done implicitly by the two firsts, ok?

Now we want to create tables in our db to work with them and finally start to take a look at SQLAlchemy’s ORM. To create new tables we will create classes that contain attributes. Each class will be a table in our db and each attribute will be a column in this table. To map which table in the db will be related to each class in our files, we will use a SQLAlchemy system called Declarative. To use this, the first thing we must do is to instantiate a Base:

Now we create a class User that inherits from our Base declarative. We will create only three attributes to our class: id (which is a primary key and can’t be null), a name and a password. Since we are using Declaratives, we must add at least two attributes: 1) a __tablename__ that how your table will be actually called inside the db and 2) at least one Column which is part of a primary key [2].

We will also add an optional method called __repr__ that will be a string that will be returned when we see our user instance.

We now have a class that indicates us how our table must be on our database. However, nothing is changed so far. To actually create the tables on our database, we will need the declarative Base we just created and the engine:

This is when SQLAlchemy will actually do something in our database. Since we have the variable echo set to True, we can see exactly which SQL statement the engine actually did on the database:

Now, even though we said we needed a primary key, I didn’t pass one for the model. And if I try to print the id of the user I just created, it will return None.

This is because session.add just register the transactions we want it to do, but it doesn’t actually do it [3].

As explained on this link, we have two operations that can be done here:

session.flush() communicates a series of operations to the database (insert, update, delete). The database maintains them as pending operations in a transaction. The changes aren’t persisted permanently to disk, or visible to other transactions until the database receives a COMMIT for the current transaction (which is what session.commit() does).

Once we have our records on our database, we need to be able to find them :)

So, to the query function of our session we will pass the class we want to look for our instance, an then use the method to filter by an attribute called filter_by.

Another way is to use the filter method, instead of the filter_by, which has a slightly different syntax:

With filter method, you can also look for strings similar to what you have:

On Jupyterhub they added to each model a classmethod that would simplify this rather complicated syntax. We can add a method that you can pass a session, an attribute, and it returns all the elements, for instance:

So, the new way to find all users named only ‘John’:

On problem I bump into while I was working with Project Jupyter was that I needed to create a new table to a database and engine that already had a initial creation (the Base.metadata.create_all(engine)).

So, imagine that now I want a table with Products such as the following:

The simplest way I found to do this was simply: 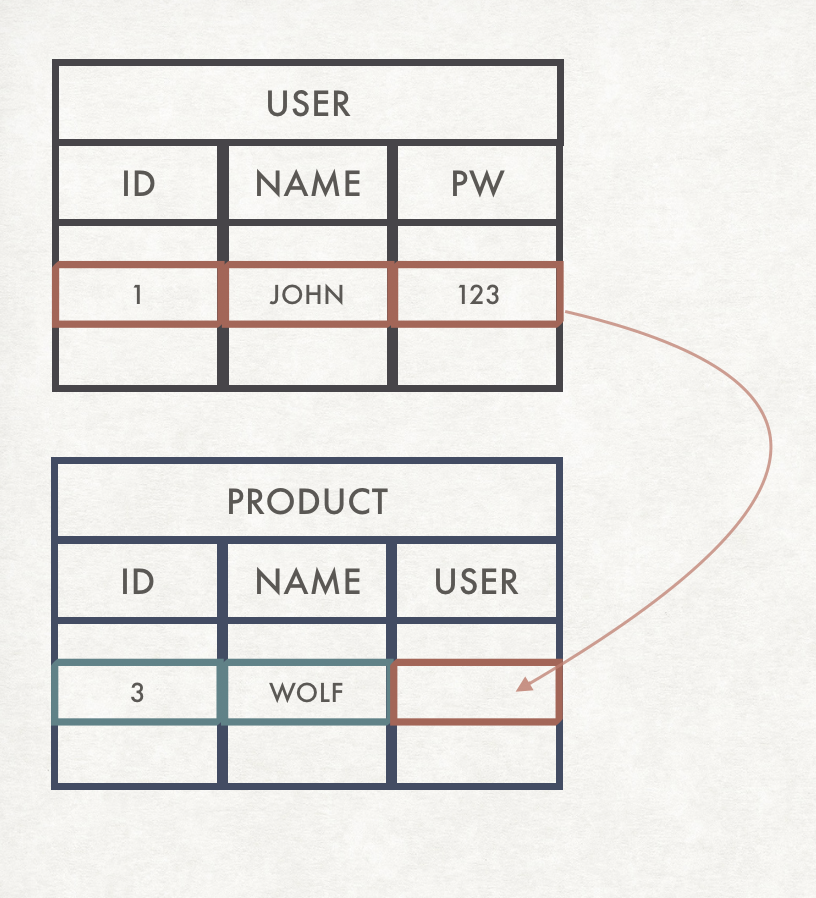 If you you are creating all tables now, you should add a Column on your Product class that references the Foreign Key of the user and a relationship with the User class:

And add a relationship between User and Product on User class:

Now you can create all tables by using the Base.metada.create_all(engine) we have seen previously.

Now, you can create a user and a product that are related with each other: