A tale of a kingdom far far away in another dimension

As I write this article, I am already talking from this world… the one we actually know so well. But I will try to explain, as best as I can, everything that I lived in this awesome week I spent in Portland at the Pycon 2016.

First of all, Pycon started to impress me months before I even knew I would go there. If you are not aware, Pycon offers a financial aid for those who does not have a $$ condition to come to one of the largest conferences in Python.

In December, my dear friend Mario showed me the form and insisted that I tried to go. I fulfilled the form, and asked for a financial aid to cover my tickets and somewhere to sleep. It is not a simple form, and I did it exposed most of my feelings there. I was pretty sure it wouldn’t happen. Well, as you can guess, on March 14th I started planning my trip.

The conference is divided in three sections: 2 days of tutorials (were you actually have long 3–4 hour courses), 3 days of the main event (talks and keynotes) and 4 days of sprints (contribution to open source projects that need a hand). 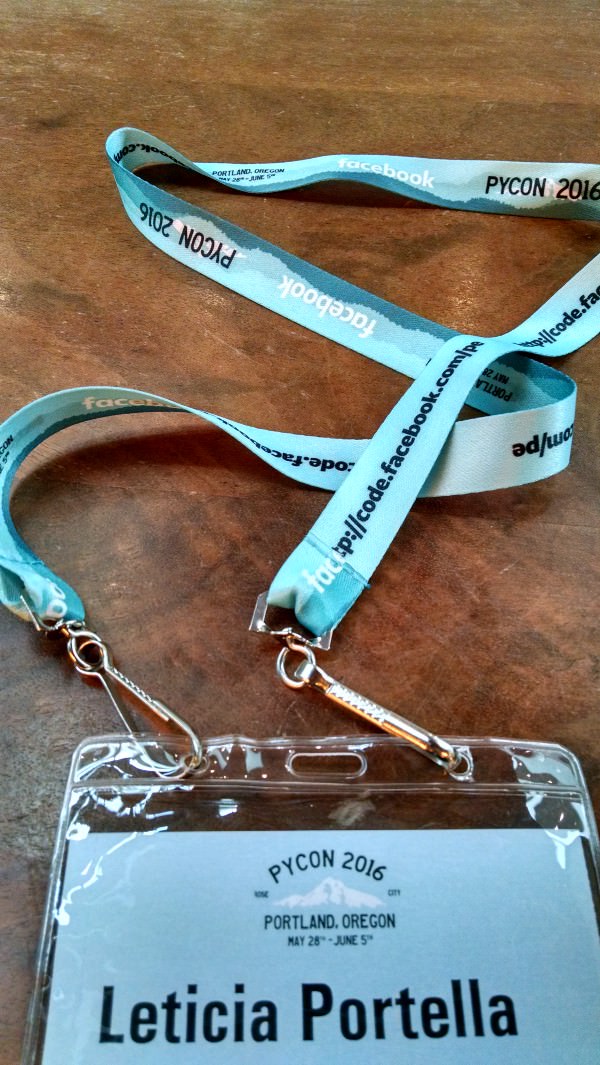 On my first day (second tutorial day) I got to the Oregon Convention Center extremely early. I simply couldn’t sleep! So excited! But I got there and surprise!… no one was there. It was freaking 7:30 in the morning! The conference was starting at 9, so I took a coffee and sat down on a table. My excitement was growing smaller. I look to my left and this guy is also sitting by himself, but he didn’t make eye contact. So, I remained there, thinking what the hell I was doing there. In the mean time I was thinking that, this awesome girl (later I discovered she a very important person in the community) came to me very enthusiastically and said: “This seems to be your first Pycon, am I right?”. After I said yes she turned to the guy and said: “Yours too, right? You have a lot to talk then!”. Done. With 30 seconds of conversation I already was talking to this guy, and learned about what he did (and learned so much!).

The day went by and I just got to know more and more people. I met some of the folks I admired in the Brazilian Python community, and they suddenly became friends, introducing me to more and more people. As the saloons were getting filled, the energy started changing and without me realizing very well, I was already becoming part of all that.

On my second day (first day of main event) the Pycon host was introducing the conference and said that there was a quiet room, where we could just not talk to anyone or take a nap. That seemed outrageous! How can you come to this kind of conference and just take a nap? Latter that day I would have already discovered that that room is actually much more important that I just thought. There is so many things happening, there is just too many people you know that, by the end of the day, you are simply tired. But you know what? Even though I was exausted, I slept very little, and enjoyed both the conference and the afters with lots of good beer.

The opening keynote was Lorena Barba, that gave an great lecture about community, culture and communication. It’s worth noticing that 40% of the event speakers were women, which is pretty crazy for this field of work. (You go girls!). One of her lectures help me a lot during my classes and I had a chance to talk to her, and she was so very kind with me. (Here we are:) 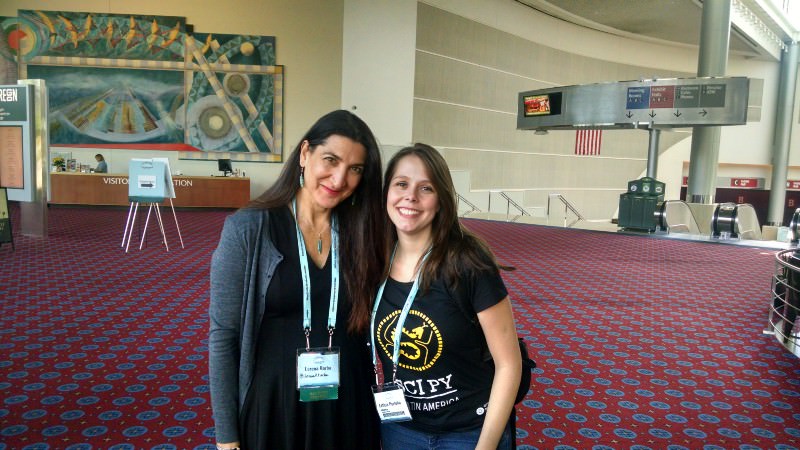 Me and Lorena Barba

But what everybody told me, and I learned it quite well, is that the talks are important, but the event is about people. Is about meeting people, and talking, discovering new areas of field you have never heard about. Its about life stories that can make you very impressed. It is about how people are open to help you, if you just ask.

It’s amazing how many different people there are, and they are JUST LIKE YOU. I was talking (and sometimes having beers) with some of the guys that I admired! And they were telling me thing such “I am no famous, I recognize you as a person and I expect the same back”. I got the confidence to approach people I admire, and ask for a photo, or ask something or say something. And you know what? Even the most prestigious and famous people were simple, kindle and humble. This event taught me a lesson about humanity, and this changed my life. Even though I lack more confidence and I think I still was a long way from were I should be, these people were talking to me, listening to me.

Here is a photo of me and K Lahrs, which had the most wonderful keynote I have ever had. Gladly I had a chance to met him the day before and share a few beers and talks… 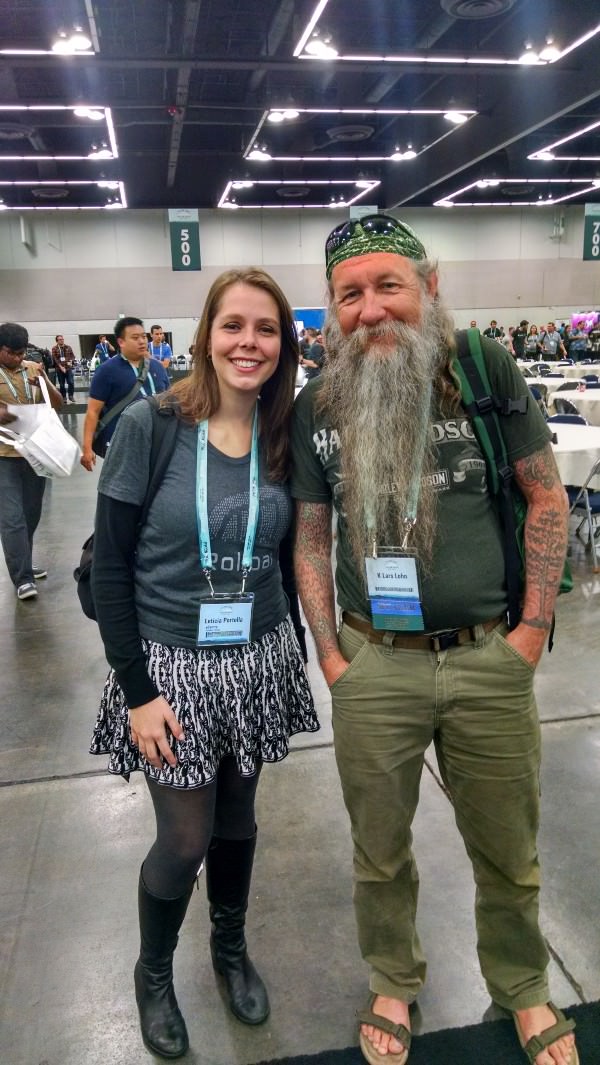 Me and K Lahrs

I met friends that thought me about life (thanks Henrique!), I met those who thought me computer science stuff (Thanks Elias and Sérgio!), those who shared personal stories to teach me a lesson and those who were kind enough to say: “don’t worry, I help you out with this”. That’s why I started my text by saying that all this happened in another dimension. This doesn’t happen in “the real world”. And the question that is bothering me now is… why not?

On the sprints, I talked to this guy of this very hard project and told him my story and that I didn’t know much. He was very happy to have me there, but 10 minutes later he asked me to read documentation. Not even write, read! I got so frustrated… I was about to leave the sprints and get to know the city better when Audrey and Daniel Roy Greenfield (authors of a great book called Two Scoops of Django) invited me to their project, Cookiecutter. They sat with me, explained what was happening, focused on a code that I could write, and how could I learn more and more. I was decided not to come on the second of sprints, but I did and they made it worth it. I could do 3 pull request and program tests, which I have never done before. It meant the world to me.

Also, I saw Carol Willing (remember the girl that introduced me to the guy on the first day?), director of Python Software Foundation, teaching a very novice girl how to do commits and contribute. When I thought things couldn’t get better, you know?

Here is the photo I took with Audrey, Daniel and Carol on the last day. Their attitude also gave me more conffidence in myself and my potential. Thank you! 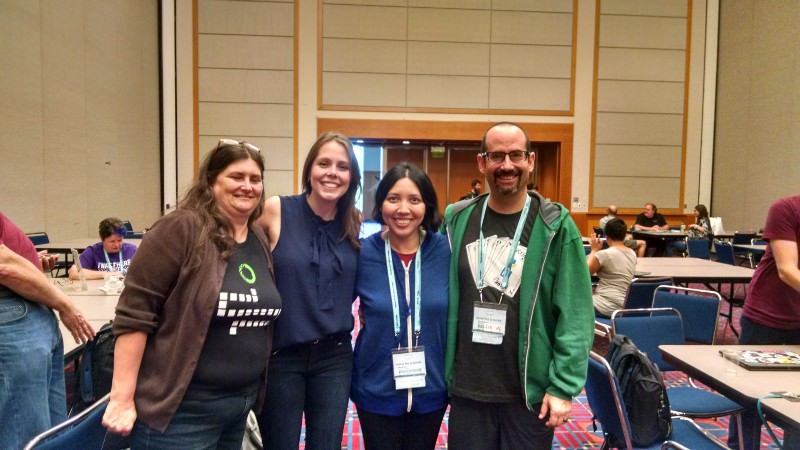 Carol, Me, Audrey and Daniel

So, as I am writing here I get kind of sad… because it seams like I really went to another dimension, where everything is so different and unexpected. I spended 6 of my 7 days in the city “locked up” in this conference center, from 7 am till 7 pm. I usually slept very little, I got super tired and I didn’t have a chance to know the city as I would like. But you know what? I don’t regret anything. It was one of the best experiences of my life, a life changing one.

I come back a little more confident, with a lot of new friends, with a little more knowledge but much, much more humble. Next year, Pycon will happen in Portland again, and in Cleveland in 2018. Hope I could come to this, and all the others to come. I want to bring that dimension into my reality, you know? 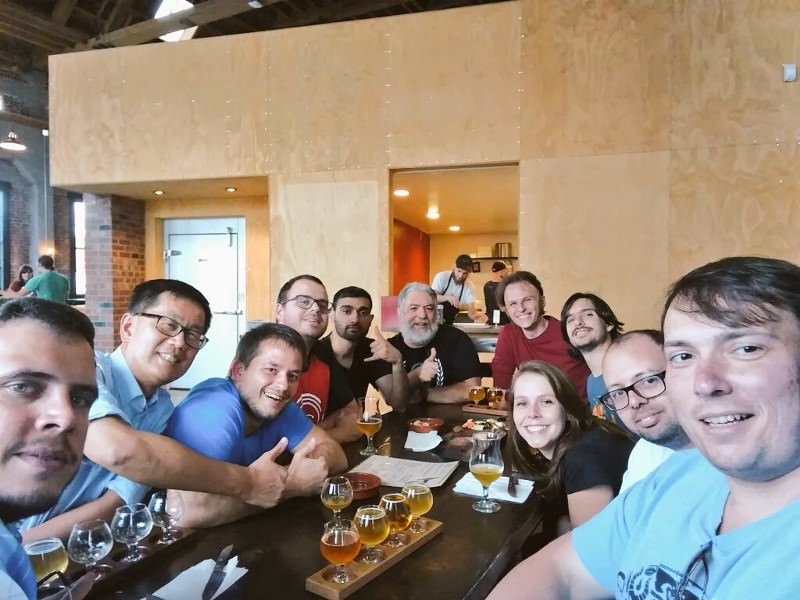 Me and the Brazilians!

Special thanks for Pycon and PSF for the financial aid, Mario for making me go there and all the great people that change me during this week…

Previous Are we getting the wrong ca...
Next Dev para leigos