This is the second part of my study on predicting the type of victims an accident can have based on the data from the National Highway Police (Polícia Rodoviária Federal), in Brazil. This was my final report for my Machine Learning Engineer Nanodegree and my first technical diploma in the computer science field (yey!).

On the first post I showed some exploratory analysis of the dataset and the cleanups. On this post, I’ll address the methodologies used for constructing the machine learning model.

This is a more personal view of my project, but you can check the full report I sent to Udacity here.

First of all, I was able to found a study made by Chong, Abraham & Paprzycki, 2005 that did a similar study, where they used neural network for trying to classify victims degree of injuries on traffic accidents. On this study, they had 5 classes of injures, including no injury, possible injury, non-incapacitating injury, incapacitating injury, and fatal injury. The features where based both on road and driver’s characteristics. The road characteristics were similar to what we found in the datasets of National Road Police. The authors found a ~60% accuracy on predicting the type of victims.

On the Brazilian dataset we didn’t have any information regarding the driver characteristics and we only had 3 types of victims described: injured, dead or no-victims. Thus, the main idea was to create a classification model that would predict one of the three classes of victims: no victims (class 0), injured victims (class 1) and dead victims (class 2).

The project contained two folders: a data folder and a notebooksfolder.

The notebooks folder contained all Jupyter Notebooks used in my project: Notebooks starting with 0 (0.*) included general analysis I did using the dataset that were not related with machine learning models and tests Notebooks from 1 to 21 included each machine learning technique and model utilised A notebook called Clean that does all the processing and data cleaning that results in the cleaned dataset (datatran_2016-2017.csv)

Through all notebooks I used the same strategy. My cleaned dataset consisted in multiple feature columns (represented in the figure below as X) and a target column that I wished to predict (called Y). The first thing I did was to divide the dataset in two separate datasets using the function train_test_split. This resulted in two other datasets: a train dataset with 80% of the original data and a test dataset with 20% of the data. I used only the train dataset to train my model.

This way I used most of my dataset but not all to train my model. I still was able to test my model by using a set that it doesn’t have seen previously. This is a way to try to verify if my model is not overfitting to the data and it can generalize well to data that it hasn’t seen before. 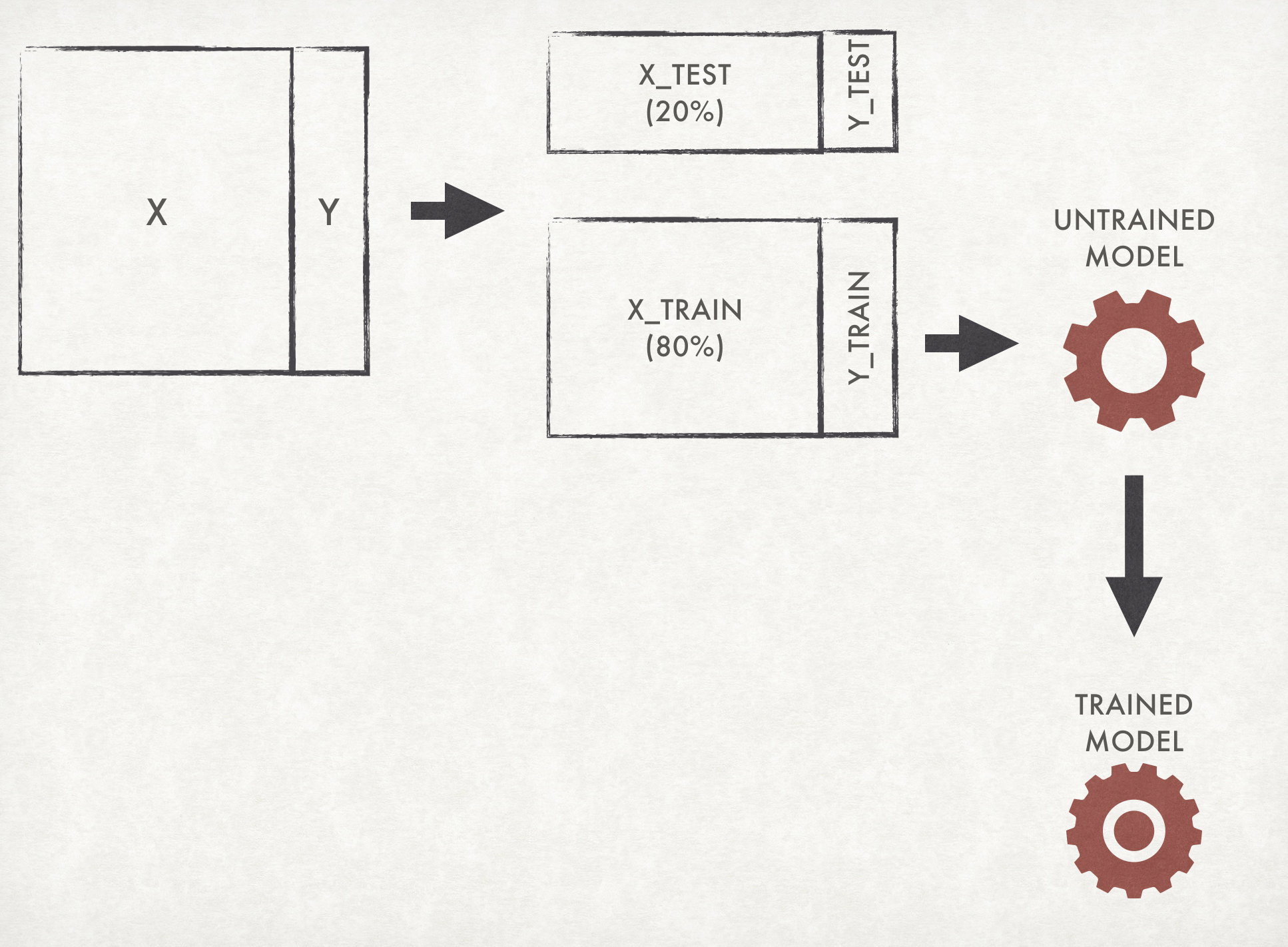 I then used my test dataset to check how well my model was doing. I used the X_test (only features of my test dataset) to make predictions and then compared the result of the model (y_pred) with the actual data (y_test). With this comparison I had information of accuracy, F1 score and precision and recall for each class, which helped decide which model was doing better. 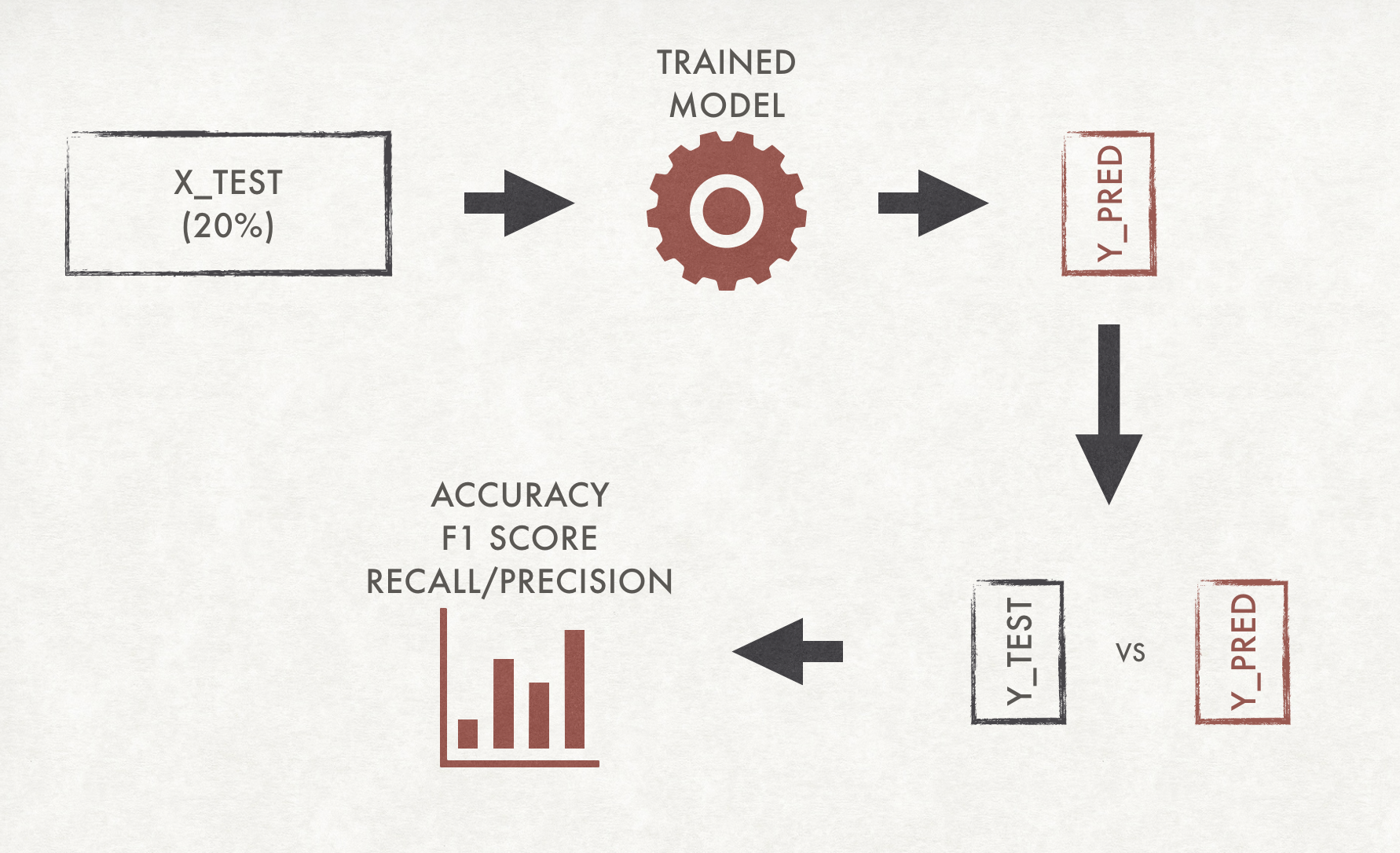 First, I created a “quick and dirt” model, using Logistic Regression (Model 01) and all variables that I considered to be of relevance for the problem. I used this as my baseline, the base on which I would compare all other models. Although this model achieved a considerably high accuracy score of 0.69, the recall on class two was ridiculously low (almost 0), so this was not even near good enough.

For this and all other models I used a technique called GridSearchCV that is a technique of model optimisation and parameter tunning. It permits to pass several values of parameters to a model class and the GridSearchCV evaluates, based on an accuracy metric you defined, which set of parameters gives better performance. This is very useful to optimize hyper parameter search and it is a good technique to avoid overfitting since it also uses a cross-validation technique.

I also used all features I could think that could be important for the model: weekday, UF (state in which the accident happened), Km, accident cause, accident type, moment of day, climate and road layout.

I used these approaches and features to the 2 models as well: RandomForest (Model 02) and Gaussian Naive Bayes (Model 03). None of them had a satisfactory result.

The main problem I was facing was that the classes were unbalanced. Accidents with no victims were the vast majority of the case (58.8%) while accidents with dead victims represented only 5.6% os the cases. I briefly studied this problem and I discovered three solutions.

The first, called oversampling, was to create samples for the least frequent classes.

The second, called undersampling, was to reduce the number of all classes based on the least frequent class (get only 5.6% of cases from each class).

The third was to add a parameter called class balance to some models, and let them know that the classes were unbalanced.

The first was a good approach but needed a deep study to make things right. Since creating could introduce errors and I didn’t have the time to study the technique, I decided to not use it.

The first alternative seemed to me a little more trickier, once it contained a possibility of messing too much with the data, and possibly making mistakes if not used carefully. Since I didn’t had the time to do this at the time, I avoided using this solution.

The second alternative, undersampling, was implemented on the Logistic Regression model and the result was good (Model 04). We had an overall drop on the accuracy (from 0.63 to 0.57) but all classes had similar errors, which made the model better than the first model.

The third alternative was tried but it didn’t gave a good result. Not as near as good as the second alternative. Thus, under sampling was the technique chosen to deal with unbalanced classes through all models from that moment on.

Since we had 3 classes that were pretty hard to solve by a single model, I tried a technique of multiple models (Thank Renan for the idea ❤️).

The general schema can be seen on the figure below: 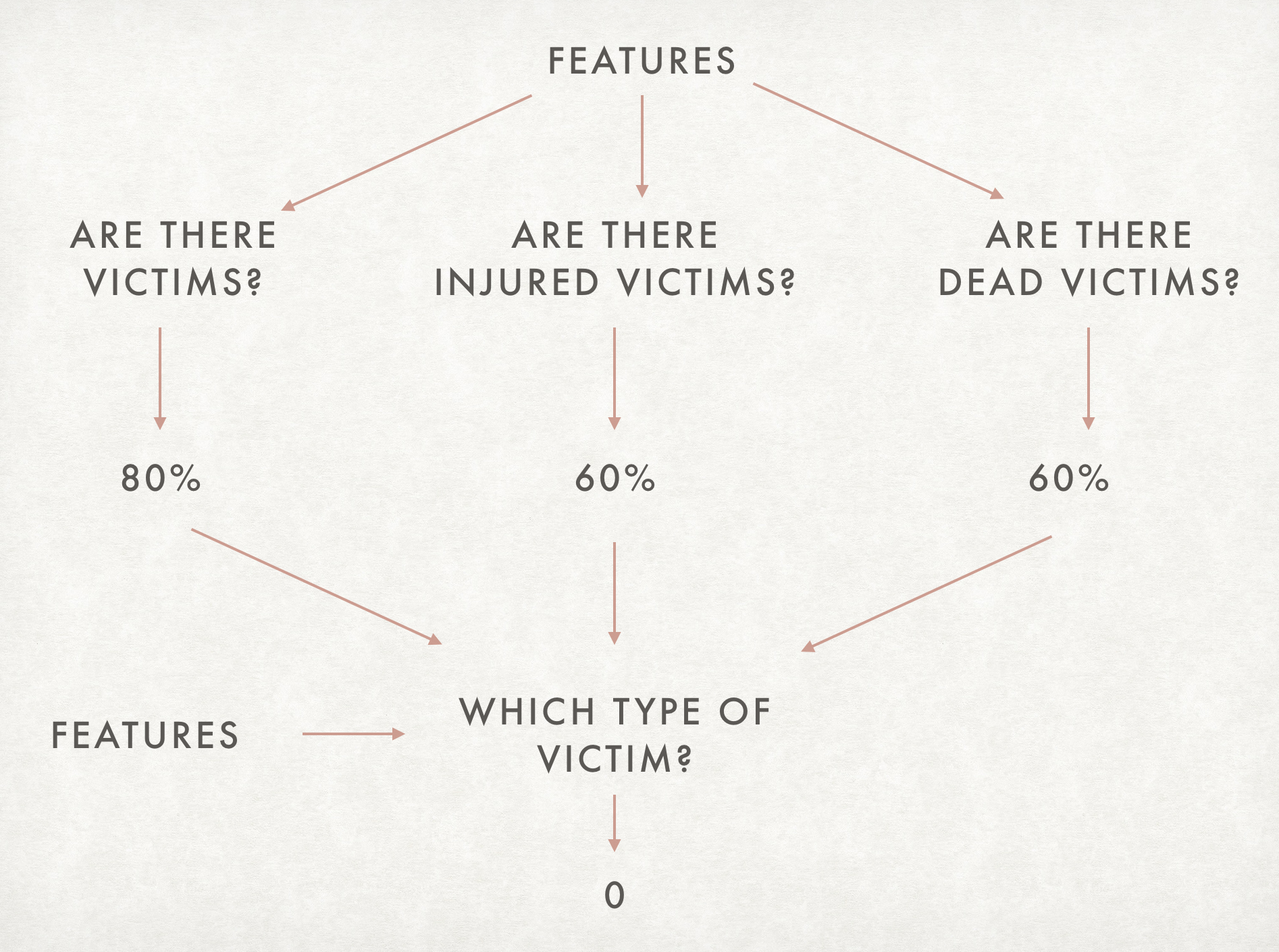 Even though this was the most complex strategy I used, this didn’t result in a good improvement of the prediction. A general accuracy of 0.56, but a recall of only 0.39 for class 1.

Maybe numbers are better than classes

In the middle of the process I realised that maybe the problem was trying to predict classes of victims instead of number of victims. That could result in a better model, so I tried a simple model to test this hypothesis. I used the variable number of injured with a Random Forest Regressor and GridSearchCV (Model 09). I evaluated the Mean Absolute Error of the model with the Mean Absolute Error of predicting the mean value of victims. The model was worse than predicting the mean value of victims, so I discarded this hypothesis and didn’t go further on trying to predict the number of injured.

I tried several models in the process of trying to get a better performance. During my Nanodegree, I had to create a list of several models and what were their advantages and disadvantages. I made a cheat list with this so I would have this easily when needed. Check this cheat list here. The models I used in this project were:

Evaluating all the models

After 10 models (with accuracy score and F1 scores for each) and 3 classes (with values of recall, precision and F1 score for each) things started to get really confusing. I could not visualize which model was better for what and I definitely couldn’t figure out where could I be better.

The final solution for me was to create a spreadsheet that contained all the values and format it with a color bar from 0 to 1. This way, I could visualize what was happening and filter the best models. This became a good friend of mine :) Totally recommend it! If you would like to use mine as a baseline, feel free to download it here.

Even though the original proposition (multiclass model) had a similar accuracy to the benchmark model, a binary model had a better accuracy and better recall, that was chosen as the best model.

The best model was the Multi-layer Perceptron Classifier (Neural Network), was optimised with the following parameters (Model 20):

The results here presented are a combination of the best algorithm and variables, but this were small changes compared to the change that could be achieved only by under sampling. 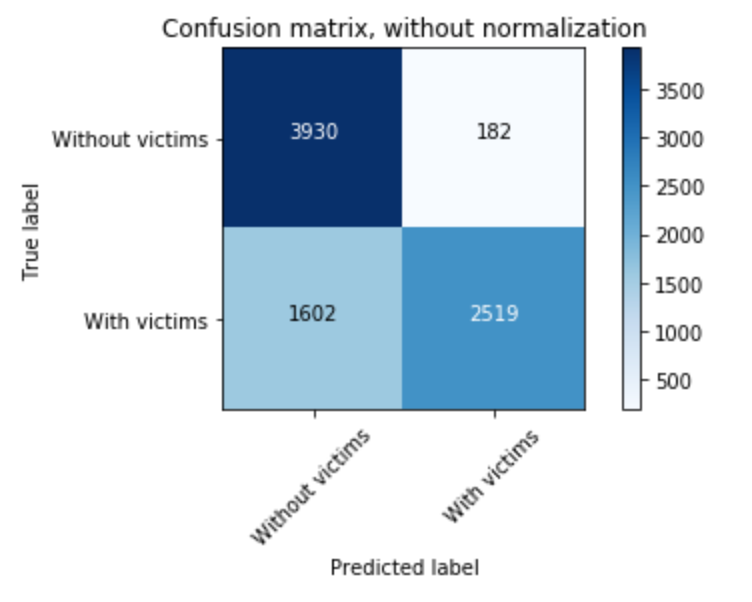 It was really fun working with Sklearn and this dataset. However, I think there is room for a better performance. I am currently studying Pytorch and want to give it a try with this dataset. Who knows?

Also, I used only 2 years dataset. I intend to go further back as well.