" 10 tips for switching from Matlab to Python | Leticia Portella

10 tips for switching from Matlab to Python

I started to study programming logic when I came across problems that required knowledge in Matlab. After a while studying Matlab I was suggested to switch to Python for its ease, simplicity and for being able to be applied to numerous areas (besides being free).

However, as I moved from one tool to the other, I had a number of basic issues that made the change a bit tricky. Sometimes I had to change my vision about some things that were already rooted in me. I decided to share both my main difficulties and some tools that helped me in the transition.

Just to make it clear, everything that is presented here is in Python 3 because Python 2 is about to retire :(

It is not the purpose of this post to discuss which tool is better, but to show how to make easier the transition from Matlab to Python :)

1. Numbers, letters and other “little things” …

With Matlab we can create vectors and arrays of numbers or texts, which are intuitive and quite useful. Basically, we can access any value in a vector or matrix based upon its position within it (Ex: list (1,2)).

With Python, in addition to lists we get to see different and very powerful structures, such as dictionaries.

Dictionaries are structures of data which you can access through the “key” of the value and not by its position in the structure. Want to know its utility? In a phone book which would it be easier: to find numbers by the position in the list or by the name of the contact? :D

Besides, there is a difference between decimal numbers (float) and integers. That is, first it is better to get acquainted with existing Python types of variables and structures! That’s a pretty big advantage!

Me when I first saw dictionaries and tuples

If you are in doubt about your variable type, just type in the intepreter: type(variable) ;)

2. Working with words and numbers

Whether through dictionaries or lists (standard Python frameworks) or DataFrames (Pandas structure of matrix/array), Python is quite easy to work with numeric data and text in the same context. T he same can’t be said of Matlab, where entering text complicates everything!

In Python, lists are accessed with brackets (parentheses are reserved for function and classes calls) and the counting starts at 0. The reason why it actually starts at 0, instead of 1 is outside of the idea behind this post, but you can check some discussions here. Anyway, this was very hard for me to get used to, as simple as this sounds.

In Matlab, the simplest way to make a loop is shown below, where you have a list and enumerate them through its items. In this loop below, for is the beginning of the loop and end define its end. The interpreter will read everything that is between these two statements as part of the loop.

Note that indentation¹ inserted is optional, it is just a good practice.

¹Identation means when the blocks of your code are markedby a space to identify what’s nested inside the code. In the example below, the four spaces before the declaration of line 6 indicate that this statement is nested (ie inside) of the loop indicated in line 5 (without indentation).

We can see below the same loop written in Python. Now, : marks the beginning of the loop and there is no end to show the end. The end is pointed out by the end of indentation on line 7. The interpreter sees that line 7 is not nested within the loop started in line 5 and, therefore, the interpreter does not consider that line within the block. In this way, it is obvious that indentation, in this case, is not optional but obligatory!

Some modules already come by default in pure Python, for example the mathematical module. Others should be downloaded from a repository, such as Numpy and Pandas. Today, more than 107 thousand projects are registered in the official repository. If you don’t find what you are looking for, you are strongly encouraged to build a new module and to add it to the repository!

However, besides the functions that come in the modules, each variable has its own functions. Specific to each type of variable, those functions that can be accessed through the variable’s name as shown in the example below.

For example, string variables are interpreted as text. For text variables there are functions to check if all letters are lowercase (.islower()) or to transform all the letters in lowercase (.lower ()) or even to check if the contents of the string are numeric (.isdigit ()).

For each type of variable (string, integer, float, list, dictionary, etc.) there are different builtin methods. Best way to get to know them is to open the interpreter, create variables and play!

6. How to know which module I should use?

If you are using Matlab, Numpy, Scipy, Matplotlib and Pandas will meet your need. Those are the main data analysis tools in Python, but there are many others. Look for codes that have already done something similar that are available in Github, Stackoverflow or check foruns.

7. Where do I see the loaded variables?

One of the most recurring problems in Matlab was that we were used to visualizing variables. The “terminal” was there, but also the script we were using and the loaded variables as well. The possibility of running just one line of code with a simple F9 without necessarily running the entire code was awkward to me.

In Python tutorials, we see that “terminal” where you type things and the results come out. In the beginning, this is frightening. Eventually I got used to it, but using Spyder helped in the transition… A LOT.

Spyder is a tool for Python, made in Python, which has an interface very similar to that of Matlab: scripts are on the left side, on the upper right side it is possible to see the loaded data and how they are composed (even with a colored background that helps a lot to quickly find the discrepancies) and a terminal with ipython in the lower right part. F9 also works the same way! For me, it was love at first sight ❤.

Look at its face: 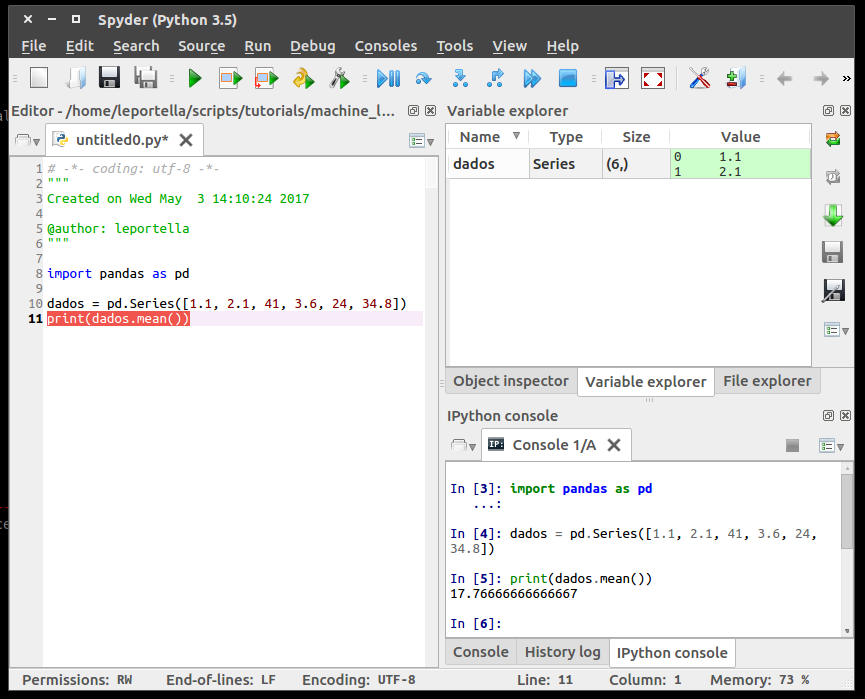 If you don’t know what a function does, simply type: help(function) and be happy :) If you have it in Spyder, you can go on the function and type Ctrl + I.

Although Matlab constructed something similar to Object Orientation, Python is strictly oriented towards object. As you progress with language, the concepts of classes (with methods, attributes and class inheritance) should be studied further. Stay tuned!

There are a number of good code practices guides, such as acceptable line sizes, how to name your variables, how many rows between functions, and so on. I had never heard of good code practices before studying another language … so that was kind of strange (and unnecessary) at first. After a while, you realize how good this is and it makes a huge difference!

Welcome to the Zen of Python